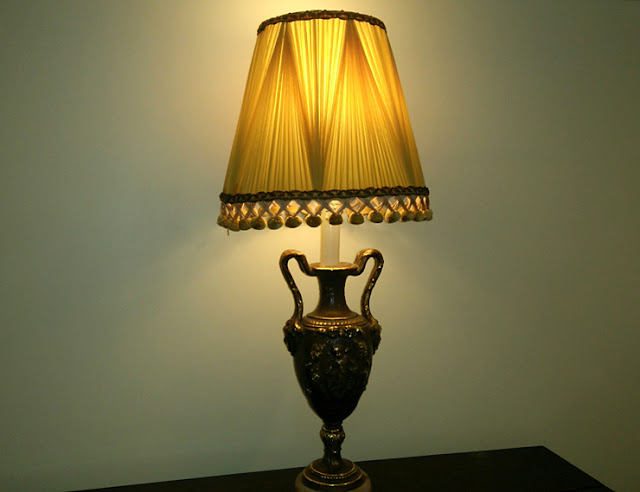 Sometimes you see things on ebay that you just can't miss... and this lamp was one of them. Obviously it is a replica of Meg's, rather than the actual one used in the series, but it is a very good match.

The lamp appeared in the show from the early days in the mid 1960's until the last time the Sitting Room set was used in 1982.

It features a marble base, metal urn and "melted candle" effect bulb holder.

I also recently purchased a pleated chiffon lampshade to complete the effect...

Now... I have a lamp, and a painting... just got to convince my family to let me install a couple of alcoves....

Posted by heathbury at 11:06 No comments:

SCRAPING THE BOTTOM OF THE SAUCEPAN?.... THE CROSSROADS COOKBOOK 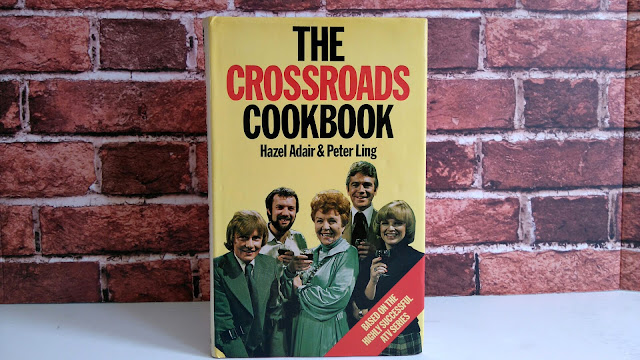 According to the cover it was written by Hazel Adair & Peter Ling, the creators of the show - The cover itself claims that it is "based on the highly successful ATV series".

"Meg Mortimer and the staff of the Crossroads Motel bring you a different three-course menu for each week of the year. The recipes are designed to make the best use of seasonal fresh foods, and they are full of hints and advice from Meg's experienced chefs that will give your cooking the professional touch."

I'm not going to say to much about this. I will let the book speak for itself....Did you know...?

"Whitebait is a popular 'easy to prepare starter which was put on the Crossroads menu by Mr. Lovejoy when he first came to the Motel"

"Vera Downend sometimes complains that, living alone on the narrowboat, she can't be bothered to cook anything fancy just for herself."

"Bernard Booth doesn't approve of his cousin Tina Webb's taste in most things but he does approve of this recipe for Mandarin Whip."

"After his trip to Turkey with Kelly, David Hunter should be an expert on the subject of kebabs."

"Nutmeg is a funny thing. (When Sandy was a lot younger, with a schoolboy sense of humour, he used used to think it was uproariously comic to say to his mother 'You're a nutmeg' - but that's another story.)"

And one of my favourites...

"Anthony Mortimer found this recipe (for Oeufs Mimosa) once during a 'lost weekend' in Monte Carlo (and the less said about that, the better!)

On reflection, the dishes in the book do sound fairly exotic for 1977 and I CAN actually imagine this appealing to viewers of the show - as a way of spicing up the traditional "meat and two veg" meals that I remember as a child...

So there you go - If you fancy transporting yourself back to the world of Carlos, Mr Booth, Mr Lovejoy, Shughie - and all other kitchen greats - grab yourself a copy of this book.

Posted by heathbury at 06:33 No comments: 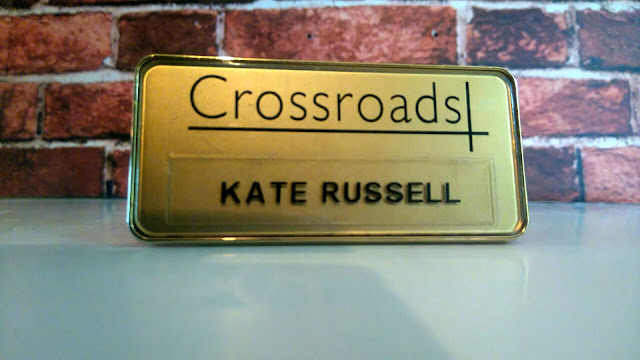 For me, the badges in my collection are interesting in many ways. Firstly they are screen-used costume/props. Secondly, they are shiny and glittery (which always appeals to collectors) and thirdly, they also feature the names of the various cast members: Kate Russell, Virginia Raven, Jake Booth, Mark Russell, Nicola Berry, Phil Berry, Sarah Harvey, Eddie Weaver, Sam Delaney and Trevor...

No I don't know who Trevor is / was either. I like to imagine all sorts of stories about what he might have been like - who he was - where he came from - his loves - his life.....

...Maybe he was there in the olden days - so much part of Crossroads that he didn't even need a second name. Just "Trevor". I sometimes re-watch the show and look out for our Trev - but I am yet to find him. Why? Was he always up to something? What stories did we miss out on? Maybe it's time for a spin-off series: "King's Oak - Trevor's Story".

I'm up for it? Anyone fancy a setting up a Kickstarter?

The other thing that is interesting about these badges is the branding that appeared literally everywhere in the new series: the title sequence, the towels, the crockery, bathrobes, the lifts, the badges, the menus, the windows, the fountain....

In 1988 (when the original series ended) there were at least three or four different logos in use for the hotel - Some of them dating back to 1982 - and this look wasn't reflected in the titles of the show. In fact, the various items of merchandise advertised on sale at the end of the series showed several of these different logos.

So there you go. Badges and Branding. I think I might watch another couple of episodes... see if I can spot Trevor... 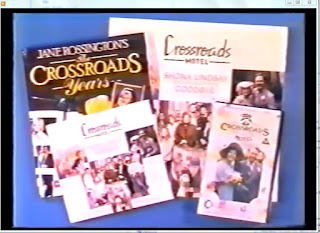 Posted by heathbury at 05:57 No comments: 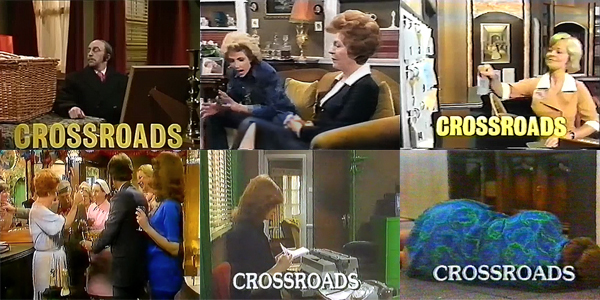 Watching missing episodes or unofficial releases of episodes might seem like a strange thing to include in this blog - but actually it makes perfect sense...

Okay - I can't actually collect physical copies of the episodes themselves in the form of a DVD release with a shiny disc and fancy packaging - but that's not really what this form of collecting is all about.

This is about finding out as much about the programme as possible. I've got the official DVD and VHS releases and I've even bought bootleg copies of the UK Gold episodes online.

With a little bit of searching on the usual video sites it isn't too hard to find copies of episodes that were either missing at the time of the DVD releases, missed off for quality reasons or simply not part of any previous release or repeat screening.

In order - the screen captures above are:

A 1974 half episode recorded by UTV and eventually broadcast by Big Centre TV in 2015
Episode 2300 (The one before the wedding) from 1975, which is poor quality, but watchable.
A 1977 episode featuring a racism storyline
A clip from 1981 commemorating the Royal Wedding
An episode from 1981 where Glenda finds that she is unable to have children
A 1981 "compilation" released to Crossroads fans.

So there you go - a strange entry in the collection, but a good one. Also a great way to spend an afternoon....
Posted by heathbury at 16:46 No comments: 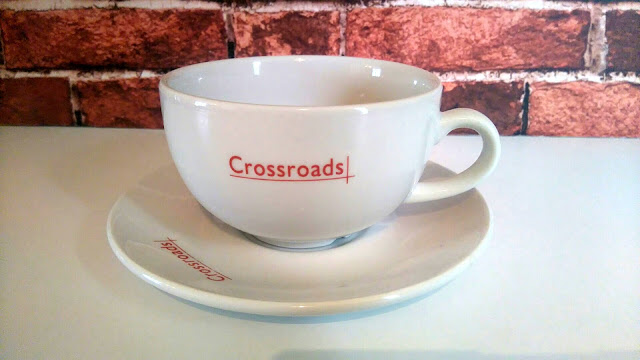 Given out to journalists at the press launch, and used on the  set of the show itself, this Crossroads crockery has become quite collectable recently - with plates, dishes, cups and saucers selling fairly regularly on ebay.

The crockery itself is made by Churchill - a well known brand used by several large hotel chains. It is therefore fairly robust and can be used on a daily basis - not just looked at....

Although (apparently) some of the first batch ordered by the studios had logos that washed off!

Posted by heathbury at 11:49 No comments: 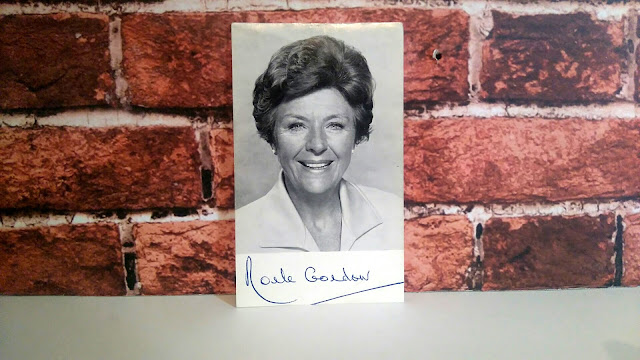 A few days ago I was talking about signed photos from the stars of Crossroads -  I talked about how the photo was a little bit of contact with the glittery world of show-biz - and a chance to own something that our favourite personality had touched...

I finished by saying that the important thing about the signed photo was that we could believe that it was made especially for us. Of course - more often that not this was true... But sadly not always...

Take for instance my signed photo from Meg Mortimer herself, the wondeful Noele Gordon.

The problem is... it isn't actually hand signed. In fact - a quick trawl around ebay and the image search of Google proves quite conclusively that either Noele was able to replicate her autograph with pinpoint accuracy every time she did it - or there were other forces at work.

The other forces being an "auto pen" - a device used to replicate a signature many hundreds of times. Not a "printed" signature as such, but an exact copy of a specimen signature. This means that - in all probability - Noele never even saw my photo-card, never mind signed it.

If you Google "auto-pen" there is loads of information about them on the internet. Interestingly, the president of the United States of America has been known to authorise the use of an autopen to sign laws in his absence.

Am I disappointed that Noele didn't hand sign my photo? Of course I am. Am I concerned that photos being sold on auction sites claim they are hand-signed when they clearly aren't? I suppose so...

Posted by heathbury at 07:32 No comments: 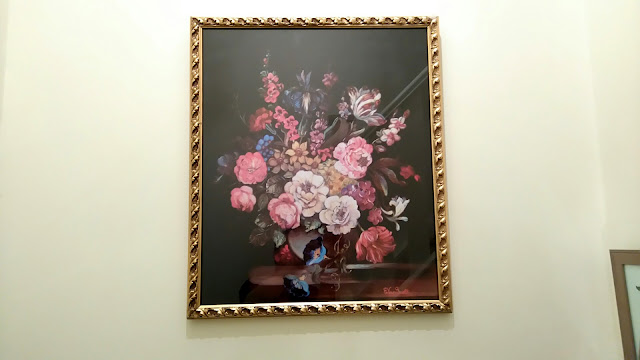 Can many pieces of set-dressing ever claim to be as iconic as Meg's sitting room painting?

By all accounts this painting appeared in the first episodes of the show, right back in 1964, and survived right up until the last appearance of the sitting room in 1982 (Episode 3573, 11th February 1982)

It is credited to an artist by the name of E. Van Guelt, although it is possible that it was painted by an ATV staff artist.

Adverts ran in national newspapers and magazines at the time - proclaiming...

"All your favourite flowers are there, fresh picked wild roses, purple iris's, peonies, beautiful carnations, all captured by the master artist's loving hand, so realistically you can almost smell the blooms."

These prints are (or at least were) lovely. Many of them were framed at the time by die-hard fans and some still come up for sale today. Unfortunately, because of age and the printing process, the vast majority have now suffered from creasing.

The poster I got hold of had quite bad creasing on it - I spent many hours scanning and photo-shopping the creases away - before spending a fair sum of money on getting in reprinted and framed...

Still - there is something quite wonderful about seeing a copy of the painting hanging in your own home that is exciting. I can't quite "smell the blooms" - although with my hay-fever, it's probably just as well!

Posted by heathbury at 13:22 No comments: