HE'S BEHIND YOU!...BENNY IN PANTO! 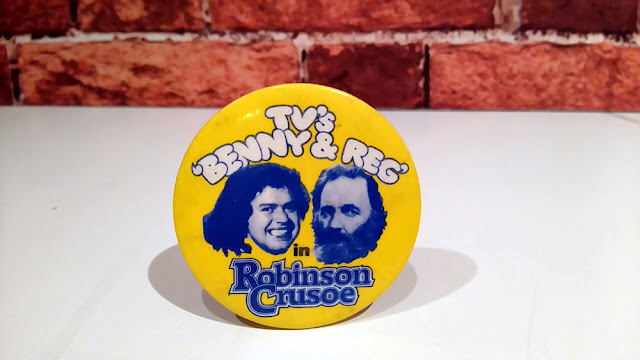 Here's a curious item - something that doesn't mention Crossroads at all, yet features two characters from the show. In this case it is Paul Henry as "Benny" and Ivor Salter as "Reg". Now I'm not sure what hairstyle Paul Henry is sporting here - but it certainly doesn't look like Benny's!

This badge was produced for the seasonal pantomime by the Theatre Royal in Norwich. I have seen a poster for the same production which says that the panto started on Thursday 18th December, which means that this badge is from 1980. A quick search on the excellent www.its-behind-you.com website (from where some of the pictures on this page are sourced) reveals that back in the day Paul Henry was a regular on the panto circuit...

I am sure that there are many others that I have missed - but it goes to show what a huge draw the stars of Crossroads were - and "Benny" in particular. In an interview for the Birmingham Mail HERE he says that he started doing panto in 1976  - although the 1983 programme for Dick Whittington states 1979.

The changing type of performer seen in panto is often a good reflection of the tastes and fashions of the day. In the 1960's it seems to have been mainly variety stars, in the 1970's it was British TV and soap stars, in the 1980's pop-stars and Aussie soap stars. In the 2000's it was reality TV stars and now it seems like anyone and everyone is lining up to be seen in panto. Let's not forget though how exciting it must have been for fans of Crossroads to get "up close" to Benny himself in 1980 - as the character was perhaps at the height of his popularity. Everyone knew who "TV's Benny" was - even without the trademark wooly hat.

Of course, Paul Henry wasn't the only star of Crossroads to appear in Panto - and I will take a seasonal look at others in a few months time. But for now - here are few other Panto posters featuring Paul (taken from the  its behind you website linked above).