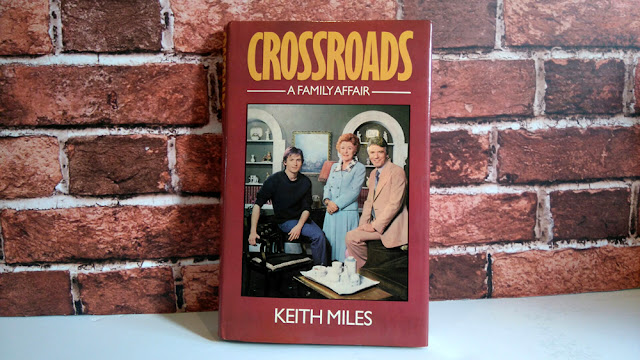 This book is a great piece of Crossroads merchandise - and is really rather sought after (compared to the previous 4 novels that were released). The original four novels were written by Malcolm Hulke and focussed on the early years of the show, whereas this book was written by Keith Miles (who also worked on the TV series) and it focuses on story-lines from the late 1970's.

In fact it was actually published twice in the early 1980s - initially by "Mirror Books" in 1980/1 and later by Arthur Baker Limited.

The version shown above is the later, hardback one - and my copy - like a lot that appear on ebay  - was at one time a library copy. Apart from the "Withdrawn" stamp from Kirklees Libraries, the book is in excellent condition.

The ISBN for the hardback version is 0 213 16727 1 Rather sadly, this version does not include the  fantastic drawings that were in the original softback edition - which isn't even a paperback - more a sort of magazine really.

Tantalisingly, the "blue version" states that it is intended to be "The first in an exciting new series of favourite Crossroads stories" - but unfortunately, as far as I am aware, this is the only one which was produced.

So how rare is it compared to the other Crossroads novels? In early November 2016, another ex-library copy of this book sold on ebay for £77 - (whereas the other books sell for a couple of quid)

Not a bad return on the original jacket price £5.25!

Posted by heathbury at 10:49 No comments: 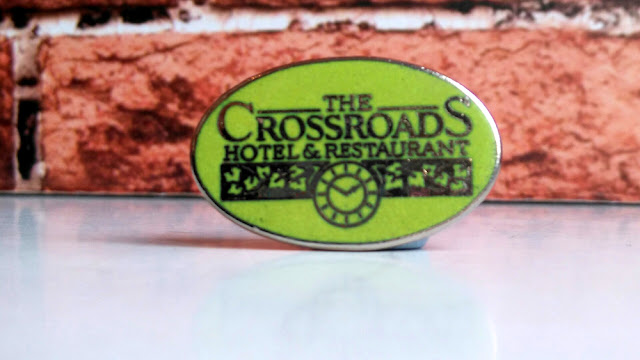 Now here's a curious item that I have bought only recently. The seller's description on ebay stated "tv connection?" - which I think is fair enough.

I wasn't sure, but my gut instinct when I bought it was that it didn't have anything to do with the TV series.


The badge uses the same font and  as the last logo used on the show. This font is known as "Poor Richard". This logo was used on screen in 1988 and was intended to be a half-way point before the show was relaunched as "Kings Oak".

This looks promising enough - but in the show, the hotel was referred to as either "Crossroads Country Hotel" or "Kings Oak Country Hotel"...

As you can see, the GREEN colour scheme and font fit - the name used does not... The screen shot above shows reception in 1988, featuring a green sign with "Crossroads Country Hotel", while Adam and Mr. Darby are both wearing rectangular badges.

It wasn't entirely impossible though as it would seem that alternatives were around in 1988 as this screenshot from an episode of "Open Air" broadcast on the BBC would suggest...

The badge was made by "Manhattan Windsor - Birmingham England" as it states on the back. This company specialised in enamel badges and is well known in collectors' circles for the quality of their products. Unfortunately  the company  appears to have been dissolved some time before 2000.

As usual, when researching items such as these, "the clues are there" - and in this case it took a little more digging... It occurred to me that there are many places  called "Crossroads" - There is one such in Weedon - where there is also a large clock tower in their grounds (Did you notice the clock on the badge?)

I contacted the pub to find out if anyone could shed any light on the badge - but unfortunately nobody was able to...A bit more digging was in order.....

A few more searches brought up an online  news article from 2007 in which it is reported that a previous landlord of the pub, a gentleman called Richard Amos had a collection of clocks that was auctioned when he passed away....

"An exhibition of clocks collected by the late county councillor Richard Amos has raised more than £70,000 at auction. All 28 clocks in the collection including a Georgian wall timepiece, which sold for 24,000, were auctioned off at a showroom in Gloucestershire after being on show for almost a month.

Mr Amos, a former county councillor for Long Buckby who died last November, had collected the clocks since 1966 when he took over The Crossroads Hotel in Weedon with his wife, Wendy. The collection, which included many antiques, became a popular feature of the pub and hotel."

At this point I was almost 100% sure that the badge had nothing to do with the TV show, but was in fact made for "The Cross Roads" in Weedon, whose landlord had a large collection of  clocks.

...Then, as luck would have it - and in a coincidence so unlikely it could have appeared in "Crossroads" itself, an article came up for sale on ebay from a 1973 edition of the Daventy Weekly Express... 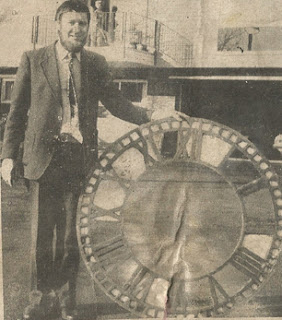 "Antiquarian Richard Amos of the Crossroads Hotel, Weedon, found himself at a bit of a crossroads. He had a valuable 100-year-old clock and couldn't think what to do with it.

Then a bright idea struck him. Things were getting a bit cramped at the Crossroads so he's build (sic) an £80,000 extension to his hotel and round his clock.

Although the 100 year old Whittlebury Lodge is soon to disappear for ever from the face of the earth part of it will live on - at the Crossroads Hotel.

The extension will be built on the present building into the hotel car park and will have a specially built tower to install the clock which was made in 1876.

The clock, Mr Amos says, has a specially interesting point - a gravity escapement. This is a specially in built piece of mechanism which puts it in the same class as Big Ben."

FOR FULL TEXT OF ARTICLE, PLEASE CLICK THE PICTURE ABOVE

Aha! At last - an answer to the question of exactly where the badge was from, and why there was an image of a clock face on the badge!

It is a real shame that nobody connected to the hotel could give me any details about the previous owner, when I enquired about the badge. I will (or course) forward them the details of the article that I found.

And there you have it - I can say with 99.9% certainty that the badge is not connected to the TV show - but what an interesting history!
Posted by heathbury at 07:48 1 comment: 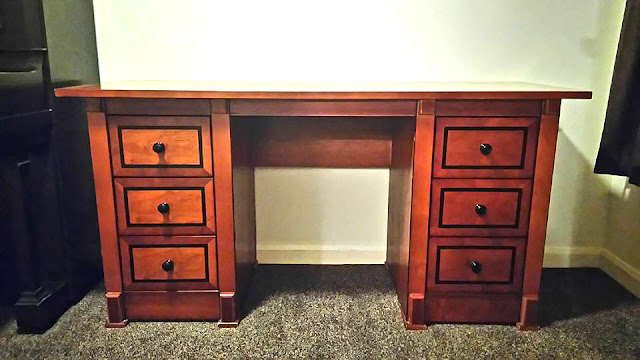 You really need an understanding family to put up with some aspects of collecting. Its OK if your collection is beermats or stamps as these tend to fit nicely into albums or drawers - maybe even frames on the walls... When it comes to Crossroads Collecting I have been known to push the limits slightly...

The photograph above shows a dressing table used in the 2001 series of Crossroads. It is currently in my study being used as a desk. The mirror from the top is in my son's bedroom, along with a circular  table - and in my lounge you can find Tracey Booth's bookcase and a lamp table.

To be honest, even I have to admit that the collection has - at times - taken over the house. I maintain that the furniture is all being used and is entirely practical. (This is a slight lie, as I currently have a hotel bed headboard stashed in secret - but don't tell anyone)

It was manufactured by a company called "Olympus", who specialised in good quality hotel furniture. This stuff was built to last! There are one or two chips, nicks and scuffs on some of the edges but generally speaking it is holding up well for 16 years old.

The furniture was auctioned after the series was axed in 2003 and (in these cases) the items were bought by various members of the crew. Thankfully, when they wanted to offload them, I was able to buy them to add to the Crossroads collection!


Of course, collecting Crossroads furniture is not new! In 1988 after the ending of the original series, the entire contents of the set were auctioned off. Pictures of the auction can be found below (with thanks to John Jameson-Davis of the Crossroads Appreciation Society) 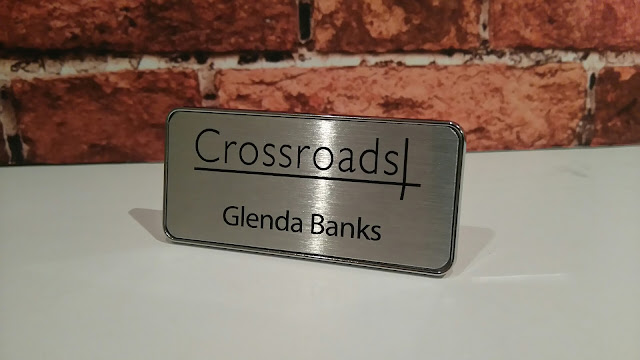 If you've read my last two posts, you will see some of the problems with collecting Crossroads merchandise... You never really know whether anything advertised as a "prop" is genuine or not.

In this case though, there wasn't really  a mystery... This is most definitely a "fake".

Of course, the clues are there... The badge contains the 2001 logo and the name of chambermaid, Glenda Banks, who left the original series in the mid-1980's.

This history of this badge is that it was actually produced as an "incentive" to join a kickstarter campaign (just a few years ago) to fund a charity DVD.

The positive side of this is that the person selling it on ebay, and the person buying it (me) both knew that it was a replica. It was advertised as a replica and everyone was happy!

Interestingly -  it was actually made by the company that produced the badges for the 2001 series to a similar design. If anything, it looks rather more stylish than the real thing!

Posted by heathbury at 13:35 No comments: 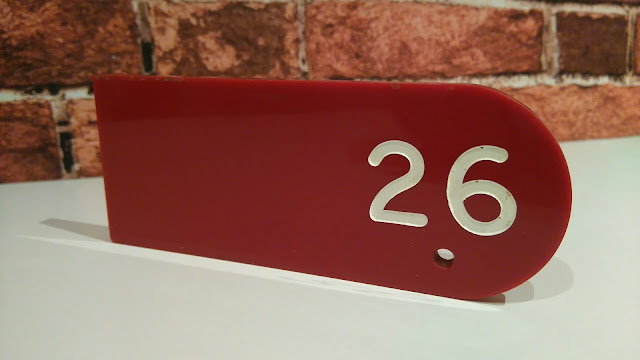 I recently bought this keyring from Ebay. The seller didn't say that it was definitely used in the programme, although did claim that it was given to his mother by a "gentleman that worked on it".

Was it used in the programme? Well the evidence is mixed really. Quite often "motel keyrings" come up for sale as novelty items. Sometimes they look quite authentic and other times they definitely don't!

This one does look very like the ones used in the show between 1982 and 1985... although proving that it is a genuine article would be almost impossible.

The evidence "for" it being genuine is exactly the same as the evidence "against" it really - Basically it comes down to studying screen-shots and publicity photos....Hopefully the following images will throw some light on the issue...

The screen grabs above show that the keyring is the right colour and shape for one used in the early 1980's. It also has a "similar" font used on the numerals (although not identical). It is possible that various different versions were made over the years to replace lost / damaged / stolen ones... By the 1970's there were several different types of numbers visible on the keyrings as you will see below....

Strangely he postcode on the keyring I bought is S2 3TM, which is actually more likely to be a South Yorkshire postcode than a Birmingham one. As can be seen above, in another episode from 1984, the postcode used on screen was B7 2CT (Birmingham) It does seem unlikely that the producers would make such a mistake on a prop like this - but if it isn't a genuine prop - and you've gone to the trouble of making it (almost) screen accurate, it seems rather daft to have made such a fundamental error on the postcode...

...Having said that, in later years, the producers also used B1 2JP as the postcode - putting the fictional motel firmly inside the postcode of the studio complex in Birmingham...

..whereas by 2001 when the show returned, B95 5WP was used on the props - which would put the hotel near Stratford Upon Avon!


This screen-shot  suggests that the keyrings on screen at around this time had blank backs - rather than ones with the address printed on (even though the idea of an address label was in common use in motels and hotels at this time).  So what do you reckon? Real or fake?

Thanks to Mike at the Crossroads Appreciation Society I have been able to take a closer look at some of the keyrings used over the years...

Posted by heathbury at 11:45 No comments: