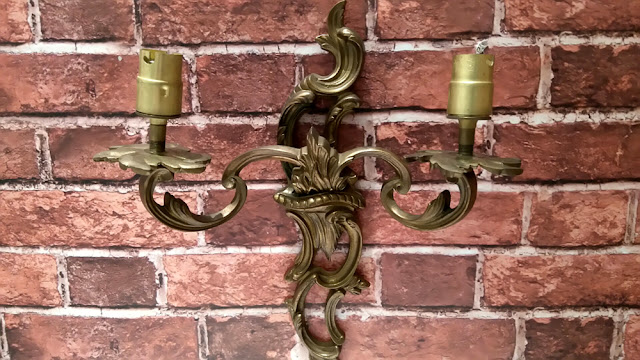 
Now where do I start with this? A few weeks ago I bought a replica of Meg’s mirror from the 1960’s episodes. A friend suggested that I should just go the whole-hog and recreate the entire sitting room. Well that would be virtually impossible, since I don’t have a spare room in the house, but it did get me thinking about trying to acquire a few more replica pieces – and so I turned to ebay. I had in mind the idea to recreate the area around the bureau – which would require some Rococo wall sconces. (That’s “light fittings” to you and me)


It still amazes me that you can search for practically anything online. There are literally hundreds of wall sconces available on ebay – all similar to Meg’s but not quite right for one reason and another - so I was somewhat astounded to find some that were almost identical to the ones in the 1960’s episodes.

As you can see, apart from the fact that they “face” the opposite direction, these were virtually identical and would be “close enough” to complete the effect that I was looking for.

There was one problem, and that was the price. Other sconces on ebay were advertised at fairly reasonable prices – ranging from £10 to £50 for a pair. These were being advertised for £140 for 4, which was way above what I could afford to spend.

Fortunately the seller was amenable to an offer for just two of the sconces and we struck a deal. I was delighted… I was overjoyed… I’ve got to be honest… I was feeling pretty smug… for all of 24 hours…

You see, no sooner had I received confirmation that the sconces were in the post and on their way to me than I saw something incredible…

An ebay advert for a “similar item” flashed up on my phone.

Could it be that the universe was playing tricks on me? I had just bought some replica wall lights – knowing full-well that the original ones were probably lost or forgotten about… only to find that the owner knew exactly what they were – and wanted to sell them!

The listing said the following…

“This pair of wall lights have been in the family for 50 years and have travelled from house to house but never been put up. Now the time has come to sell. They are the original wall lights from the mid sixties used as part of the Crossroads Motel set until the ATV filming was moved from Aston Road Studios Birmingham. A great and well-preserved piece of memorabilia. The numbers on the back refer to an auction of props which happened at the same as the move.”

I had just spent my monthly collection budget on the replicas - But…What choice did I have?

I duly contacted the seller and arranged to buy them – The photo with the listing showed that one of the sconces was indeed the correct way round to match to the screen capture from the 1960’s.

Now… I do have a few issues regarding how authentic these sconces are – and I can’t in all honesty say that I am 100% sure that they are genuine. I knew about the auction as Central TV left Broad Street and the auction of props in 1988 but I had never heard of an auction as ATV left Alpha Studios (around 1968/1969). In fact I would love to know more about this – so if anyone has any details, please do get in touch.


In later episodes from the ATV Centre in the 1970’s it is possible to see both sconces – and sadly they BOTH face the same direction – which would appear to rule out these being the fittings from the 1988 sale of props. However a close look at the set over time shows that the position of the lights changes regularly on the wall above the bureau as it is removed / half built for each episode. In some episodes they are close together, and in others they are significantly further apart. Who is to say that ATV didn’t own a job-lot of these at one time and the scenery builders used whichever came to hand?


Certainly, by the time Crossroads was filmed at the Broad ATV Centre, the whole sitting room had been rebuilt – the position of the lamps and the breadth of the wall where Meg’s painting hangs changes quite a lot from episode 497 to the 1970’s. Maybe a complete new Sitting Room set WAS built when the show moved into the new studios? - complete with new light fittings...

Anyway – I now have 4 of these things –and clearly two are very much surplus to requirements. Who would have thought it? What are the chances of the “real” ones being put up for sale the day after I have bought some replica ones?

Look out for them on ebay soon!
Posted by heathbury at 17:39 No comments: