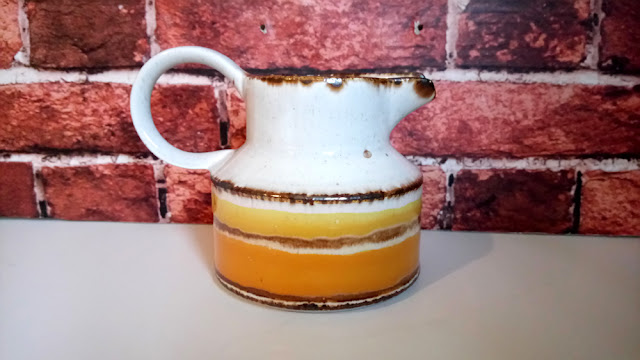 Actually, finding this was something of a happy accident. I went into an antiques shop to ask about a completely unrelated item from the show. The chap in there knew nothing of that item, but happened to mention that he knew what Jill's tea-set was called. It transpired that as a student (40 years ago) he had been surprised to find that she had acquired the same set as he had -  at around the same time.

For many Crossroads fans in the 1970's this tea-set was something of an "aspirational" item - However its classic design and bright colours make it feel as fresh and contemporary today as it did over 40 years ago.

The "Stonehenge" range was designed by Roy Midwinter and was decorated with designs created by Jessie Tate, Eve Midwinter and various other artists.

You can find a full history of the range HERE.

Strangely, at the time of writing, there are many, many items available to buy online - quite a few of them are from America - so (while the items themselves are not expensive) the postage is quite high.

I don't intend to buy the full set, but I was impressed that a random person I met was able to talk in detail about something from Crossroads that he remembered from his youth. You see - I'm not the only nutter out there!

Posted by heathbury at 10:43 No comments: