HOBO ON A PARK BENCH - NOT BENNY! 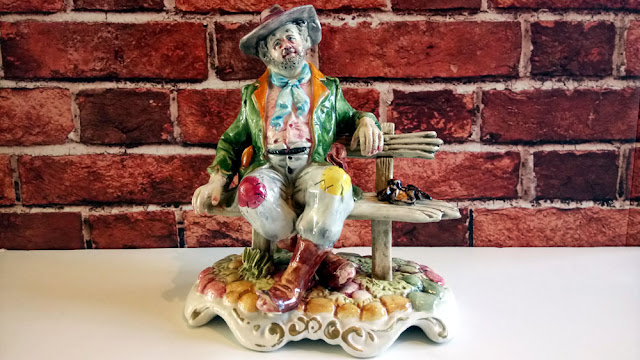 There was actually a rather famous hobo - or tramp that appeared regularly in Crossroads for many years. With his distinctive headgear, battered jacket and patched up trousers, you may be forgiven for thinking it is Benny that I am talking about - but no!

One of the more distinctive pieces of porcelain in Meg's collection was a hobo on a park bench - complete with worn out shoes and patches on his knees.

Now as you will know if you are a regular visitor - as well as enjoying Crossroads, I have started a min-collection / mission to recreate parts of Meg's sitting room - and part of that involves buying replicas of the ornaments she has in her collection. One such piece is this...

Now it seems to appear around the time that the sitting room turns brown - so slightly later in the series - and is often featured behind the characters.

This is (I think) a cheap replica of the actual type that Meg had - as the colouring is slightly different and less well applied - but from a distance it is a pretty good match. I recently bought this from ebay for a very cheap price as there is some damage to the shoes - but undamaged and original ones seem to go for a lot more!

This one was described as a "Capodimonte Hobo on a Park Bench" - should you also have the urge to buy one!