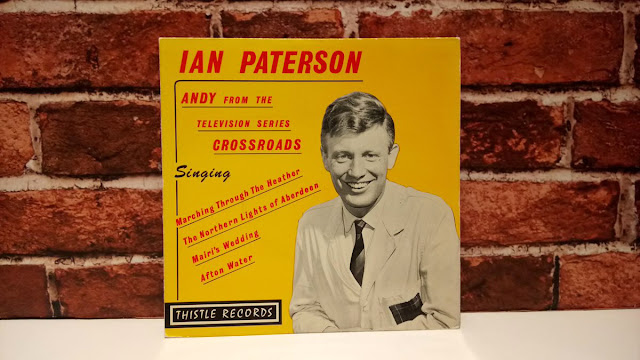 Well we all know that Meg Mortimer would strike up the band, engage "John" in the key of D and even give Chester Harriott a nod on the piano, but did you know that her brother, Andy was also fond of  a singsong?

This is a great piece of nostalgia for fans of the show - and another rare piece of merchandise that credits the "character" as well as the actor. It is also another example of early TV tie-in merchandise as it dates from 1966.

His obituary in "The Scotsman" referred to his love of singing and his roots to Scotland:

"IAN Paterson enjoyed several years as a top-of-the-bill singer in many of the leading Scottish theatres from the post-war years till the Sixties. He had a charming light musicality to his voice that blended in well with other leading singers and his warm and jovial personality made him popular with audiences all round Scotland. "
READ MORE HERE

Ian joined Crossroads in 1965 and appeared (on and off) until 1975. As the brother of Meg he was involved in many story-lines throughout his time - and was even the focus of the 1966  "500 episodes" celebration when his character married Ruth Bailey. His last appearance, as far as I know, was to attend the wedding of Meg and Hugh in 1975, appearing at the wedding reception held at the "Droitwich Hotel" in episode 2302 - although not at the Cathedral itself in episode 2301.

Shame he couldn't make the wedding. Clearly he was only interested in the cake...  Wedding breakfast aside I like his relaxed performance in the show, and look forward to hearing this record - if I ever buy myself a record player!