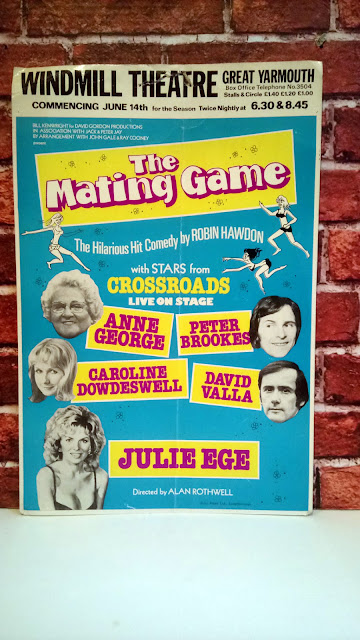 Just when you think you’ve seen everything, something interesting comes along to pique your interest. Such were my feelings when I saw this vintage theatre poster for sale a while back.

Now many of the stars of Crossroads were equally at home on the stage – so it comes as no surprise to learn that there are numerous examples of theatre productions featuring them.

What makes this an interesting item is that so many stars of the show are together at one time, and that it specifically plays on their Crossroads links.

The website of the play-write Robin Hawdon, HERE describes the play, written in 1973 as follows…

'One of the most enduring comedies on the international theatre circuit since its long run in London's West End in the 1970s. Staple diet of stock and amateur theatres everywhere. Five in the cast and a set which almost outacts them all!'

Set in a smart Mayfair apartment, full of gadgets with a mind of their own, the story concerns the frantic attempts of a trendy young TV personality, to both lose his virginity and avoid true love, whilst at the same time preserving his image as a notorious stud. Despite poor initial reviews the play was hugely popular with audiences, became a regular on the British touring circuit for the next twenty years, and is still frequently revived abroad.

I think it’s fairly obvious which actor was playing each part from the descriptions above – but in my mind there’s a strange version where Amy Turtle is Honey Tooks.  No? Just me? I’ll get me coat.

Posted by heathbury at 09:41 No comments: 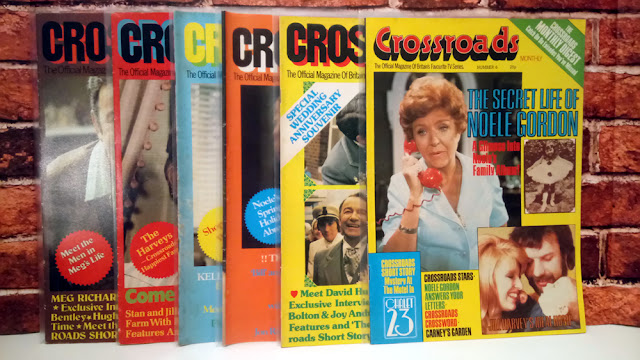 
In 1976 an exciting thing occurred for Crossroads fans up and down the country… The launch of “Crossroads Monthly” – It was billed as “The Official Magazine of the ATV series” – well for issue one at least…By issue two it had become “The “Official Magazine of Britain’s Favourite TV Series”.

Looking back that seems quite a claim to make – but the series was riding high following the 1975 wedding of Meg and Hugh and it is easy to forget just how popular the programme was back then in the “golden years”.

It was produced by Felix Dennis and published by H. Bunch and Associates, under licence from ATV licencing Ltd, with Pictorial Content © ATV Network – should you be interested in that kind of thing.

Anyway, back to Issue one of “Crossroads Monthly” – it features a gloriously 1970’s brown cover, and a photo of Meg and Hugh (with Hugh in a silk dressing gown). It promises such delights as a “Meg and Hugh Full Colour Pin-Up”, “Exclusive Interviews with Noele Gordon and John Bentley”, a Crossroads Short Story by Malcom Hulke… and the chance to “Meet the Men in Meg’s Life” – which isn’t as salacious as it sounds – but is deemed worthy of TWO mentions on the cover… How could anyone resist?

So – what did the reader get for their 25 pence? Well – actually – quite a nice magazine if truth be told.

Page 2 claims that the magazine intends to tell you “everything you ever wanted to know about the longest-running programme in television history!” Now I’m pretty sure that the producers of Coronation Street (1960), Blue Peter (1958) and even Doctor Who (1963) – to name just a few – may have had something to say about such a spurious claim about Crossroads (1964), but I can’t blame the producers for “bigging themselves up a bit” so we’ll gloss over that statistic.

It goes on to describe Meg Richardson as “the reigning queen of Crossroads” and “The best-loved female character on TV”. It also describes Noele Gordon as “the most popular actress”. Her numerous TV Times awards at this time does indeed back up this claim – and it easy to see why practically the whole magazine is devoted to Noele/ Meg.

There are some great photos – some of which (I am led to believe) no longer exist in the official archives – which makes these magazines quite important when it comes to preserving the history of the show.

Strangely for a magazine aimed at an adult audience, the characters themselves pop-up in all sorts of ways to introduce features. There is a “photo album” presented by “Meg” from 1967 when the Crossroads team flew to Tunisia, and even extracts from her diary

One of my favourite articles is “Mr. Booth Presents… Crossroads Cookery”, where the Crossroads chef himself apparently gives readers the low-down on how to make such culinary delights as Italian Ministrone Soup, Lasagne Verdi al Forno and Shwarz Walder Kirchtorte (Black Forest Gateaux to you) – These would have been fairly exotic dishes for 1976 I am told!

Trips to Tunisia, an interview with “Hollywood” actor John, Bentley and the ‘posh nosh’ reflect something of the glamourous appeal of the show – which is so easily forgotten by modern-day detractors, TV critics that were born yesterday and “talking heads” on 21st century clip-shows.

Issue Two makes no secret of the fact that the publishers were trying to cash-in on the enormous success of the TV Times “Wedding Souvenir” from the year before – it is a full blown “anniversary souvenir”. By now the “regular” features of “Crossroads Stars” (astrology) make their first appearance – as does the “Mail Box” where Noele Gordon attempts to answer questions from readers (some of whom actually seem to believe that they are writing to Meg Mortimer). Mr. Booth goes all-out with recipes for “Smoked Mackerel Pate, Mushroom Soup, Shoulder of Lamb with Orange and Lemon Stuffing and Chocolate Orange Mouse” (It really does say “Mouse”). There are also adverts and offers for “Crossroads” novels, the Wedding LP and even “Noele Gordon Sings” LP and there is even a “Royal Visit” included – when Princess Alexandra opened the ATV studios in Birmingham.

By Issue 6 (which features a new logo), regular features include “Home Hints from Jill Harvey” and “Carney’s Garden” alongside Mr. Booth’s recipes for “Melon Balls with Orange, Milk Lemonade, Peach and Orange Ice and Savoury Rice with Chicken Livers and Raisins”. The last page again features astrology and a Crossword – although some of the links to Crossroads are a bit ‘thin’ (e.g. 9 Across: “It might help to make a cake in the motel kitchen (6)”)
In fact the last 6 pages or so actually have very little relevance to Crossroads at all – certainly no Crossroads photographs and even the main feature focuses again on Noele Gordon (in the form of family photos).

Could it be that the magazine was running out of Crossroads steam? It is difficult to say. It is said that the publishers only had a six-month deal – during which time they actually produced seven issues.

The seventh issue (featuring Noele in a swim-suit, sitting on a fence as its main cover image and a price increase to 30 pence) promises that issue 8 will include various features, including an interview with composer, Simon May – but sadly it was not to be! Apparently the licence was not renewed and it wasn’t published.

So after six months, the magazine ended. I am led to believe that it sold well at the time – and the regular appearance of the first six issues on ebay certainly backs this up. The seventh actually comes up a little bit less often than the others, and some fans have speculated that this suggests that sales fell, although there is no official evidence to support this.

Have I read the magazines? Yes.
Do they tell me “everything I ever wanted to know”? No.
Will I ever try Mr. Booth’s recipes, Carney’s gardening advice or Jill Harvey’s home hints? Maybe.

I like the magazines – but I’m glad there are only seven to collect!

Thanks to Mike at the Crossroads Appreciation Society I can share the following image with you - that reveals what WOULD have been in Issue 8 - had it been printed.... 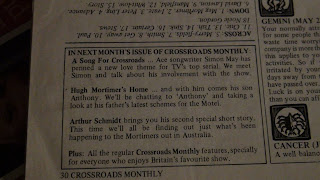 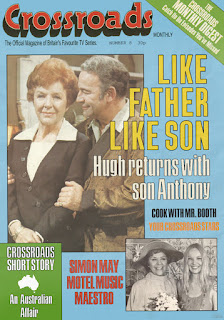 Posted by heathbury at 17:22 No comments: