SUE NICHOLLS - WHERE WILL YOU BE? 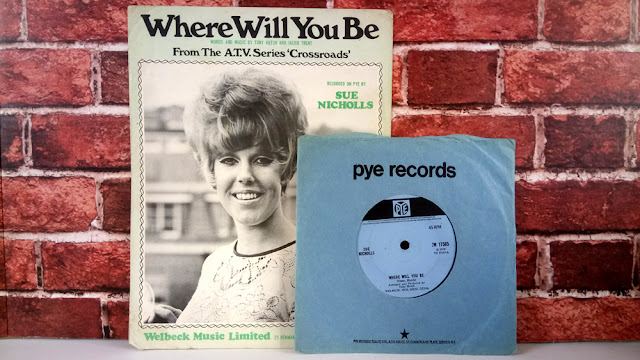 Looking back, you’d be forgiven for thinking that the soap-star takeover of the pop-charts began in the 1980’s with the likes of Kylie and Jason – however the truth is really a little closer to home…

In 1968, motel waitress Marilyn Gates (aka actress, Sue Nicholls) was involved in a storyline where the character appeared in a night-club sequence singing “Where Will You Be” – an easy listening piece – penned by composer, Tony Hatch and his then wife, Jackie Trent.

Of course, this wasn’t the first record to be released with a connection to the show, with actor, Ian Paterson having released a collection of music as “Andy from the Television Series, Crossroads” in 1966.

Following the success of the record, Sue decided to leave Crossroads, and the role of Marilyn was recast.

Sue was reunited with Tony Hatch in 1996 on an edition of “This Is Your Life” celebrating her life and career, where he promised to pen her a follow-up single – which has (so far) failed to materialise. Of course, Sue is much more well known today as Audrey Roberts in Coronation Street – a role which she has played since 1979 – so don’t be surprised if one day, Audrey is seen doing a “turn” in the Rovers…

There are several different versions of the 7 inch single that are almost continually available on ebay, if you fancy a listen – and it is currently available on YouTube.

The sheet music to the song was also released and is fairly easy to come by.