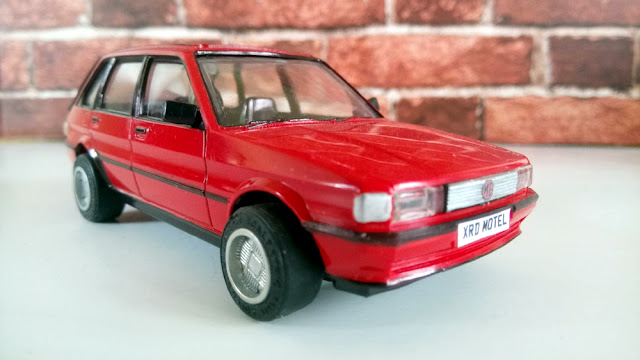 A RED MG-MAESTRO - NOT DRIVEN BY DAVID HUNTER

In 1985 a strange thing happened. Crossroads got its first ever title sequence. Up until this point, a photo-caption or simply the first scene with a superimposed "CROSSROADS", accompanied by the first few notes of the theme tune would be all that drew viewers into the events in the Midlands motel.

But then, in March 1985, (Wednesday 6th - Episode 4046 to be precise) - the red MG Maestro titles happened, and all of a sudden the programme was going up-market.

For a long time there were rumours that Ronnie Allen (David Hunter) was the mystery driver of the car but I remember this being  dismissed on an episode of Central News (or some regional programme).

I'm not really a "car" person, but there is something iconic about the shots of this car driving through the Midlands countryside that really caught my imagination.

Sometimes a full size Maestro comes up for sale on ebay and I am tempted - but only for a little while - after all, this particular model would now be well over 30 years old and I have the feeling that it would take a lot of work to keep it looking pristine.

And so I decided to buy a model Maestro for my collection.... And this proved to be quite tricky as there doesn't seem to be that many out there. Eventually I did come across this - a red Scalextric car (complete with metallic pickup things) - that is apparently a limited edition.

When I got it, the wheels were gold and there was no black detailing - the inside was green and there was no number plate. I have added one or two bits to make it look the part and I am pleased with the result - even if I have probably upset the Scalextric collectors out there.


Find out more about the route taken by the car HERE
Posted by heathbury at 16:05