I have just bought a coffee table. I’ve been looking for one for a while. It’s not quite the same as Meg’s, but it’s not far off. You’d actually be surprised how much variation there is in this sort of thing – the claw feet, the lyre supports, the colour of the leather top, the size of the leaves, the shape of the drawer handles…..

But this is not just a coffee table. It’s a Crossroads coffee table – and I am about to argue that it is perhaps the most important piece of furniture in the whole series. Well I would – wouldn’t I?

Actually – to be more specific – I have just bought a drop-leaf, reproduction, leather-top sofa table. It was actually the second table to grace the middle of Meg’s sitting room – the first was more of a wine table, but essentially they both served the same purpose.


Sadly, the earliest surviving episode (126) doesn’t feature any scenes set in the sitting room, but episode 496 does. It is holding Andy’s cup of tea (with saucer of course…) Now you might think that being somewhere to place a cup of tea or a glass of sherry is actually the whole point of a coffee table, and I suppose it is, but in the world of Crossroads it is so much more. You see, having the cup of tea on the table gives Andy a reason to be in the sitting room, sitting down, when he should be out looking for Ruth. As much as it gives him a reason to be there, it gives Meg a reason to sit beside him in a rather beautifully framed shot from the fireplace....


Around 500 episodes later, Meg is facing prosecution for knocking Vince Parker off his bike. The coffee table then holds weighty volumes of legal looking books, whilst her lawyer sits at the bureau. Instantly Meg’s sitting room has become his office without the need to build an expensive set. The cheeky fellow even makes a telephone call!


The next image shows another good reason for having the coffee table – it allows people to sit in a semi-circle in the most contrived manner you can imagine – without it looking too awkward. Ideal for the large and cumbersome video cameras of the 1960’s and 1970’s as it allows the director to get an establishing shot with all the characters inside the confines of the three-walled set. In some situations it allows four or five characters to be in the same shot throughout an entire scene. Since there is a coffee table, the excuse of a having a hot drink gives them a reason to sit together. I also love the blue tape marks on the floor that are supposed to show where the feet of the table should be – either Meg is slightly OCD about where her furniture goes or the director was determined to get exactly the right shot! 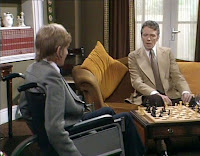 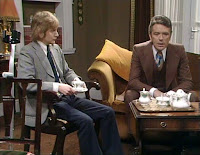 Later, following Sandy’s accident, the coffee table provided him with an appropriately positioned surface to place drinks / work / read etc.  that could be easily reached from the wheelchair. It also allowed other actors to be at the same “level” so that the cameras could get a decent two-shot. David and Sandy are in two almost identical positions in the images below, but at least the inclusion of a chess-board / tea tray gives them a reason to be sitting there.


Throughout the series, the coffee table allowed the characters to engage in various activities within the walls of Meg’s Sitting Room – whether that be flower arranging, playing chess, drinking, reading, wrapping presents, looking at photographs… The list goes on…

It doesn’t matter that many of the people using the room aren’t Meg or her immediate family – the set was so large, that versatility had to be key.

One of my favourite bits of “business” is when the vicar is coming to speak with Meg and Hugh before their wedding; Meg hurries about tidying hitherto unseen magazines from the table and plumping cushions. Bliss. 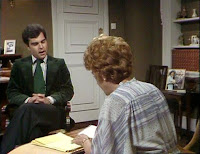 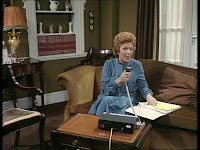 The later “sofa table” was also useful as it could act as a mini-desk when the office set wasn’t required. The problem with the bureau is that the person working at it has to turn around to interact with other actors, whereas the small table meant that they could face each other.

Have you noticed that there is always an extra cup on the tea tray whenever a character drops in half way through a scene? The fact that they can be offered a drink from the tray means that the action can stay in one place. I find it quite amusing that in one scene Mrs Cunningham and Sandy are enjoying mugs of tea. You just know that nobody else is going to be offered a drink.

So back to my table – it is similar to the one that appears some time between March and December 1975. The first surviving scenes I can find are in episode 2450. It last appears in 3573 in February 1982 with the retirement of the Sitting Room set.