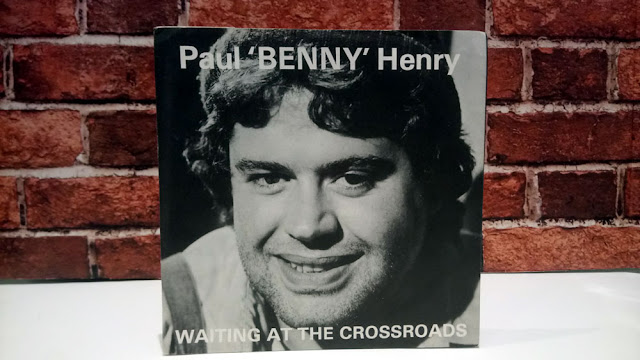 Crossroads was no stranger to the pop-charts over the course of its original run. I have already looked at a couple of releases: Sue Nicholls’ “Where Will You Be?” and IanPatterson’s “ANDY From The Television Series CROSSROADS Singing…”

Today I turn my attention to “Paul ‘Benny’ Henry – ‘Waiting at the Crossroads’”.

Paul had already had something of a minor hit with “Benny’s Theme”, a song he performed in the show circa 1977 – It was often used to accompany the storyline concerning the death of Benny’s fiancé, Maureen.  “Benny’s Theme” was released by Pye Records  in 1978, and in it, Paul was accompanied by the Mayson  Glen  Orchestra . It peaked at no. 39 in the UK Singles Chart in January 1978.

The follow up was “Waiting At The Crossroads” and it was released as a 7” single around December 12th 1980.

It was the first release on the “PEL” label, and a little bit of internet searching shows they had a “varied” list of artistes in the catalogue. Okay then. Three.

The record repeats the trick employed by the Theatre Royal in Norwich when advertising their pantomime as featuring “Benny” – Let’s not forget just how popular the character was with the British public in the late 1970’s / early 1980’s.

Some ‘wag’ on the internet has commented (perhaps rightly) that the catalogue number is actually “POO 1” – and therefore a damning indictment of the record itself – and to be fair – it’s not my cup of tea.

I won’t bore you with the full lyrics here, but at one point Paul, no Benny…. even sings about his little woollen hat….

Here I am
Waiting at the Crossroads
Hoping that someday I’ll meet a wife.

I know I’m not a very smart kind of chap.
But I’ll give her all I’ve got to give.

I would even give her my little woollen hat.
If with me she’d live

What the record does have in its favour is that the music video that was filmed to accompany the release…Benny – I mean Paul – No I mean Benny – walks around Gas Street Basin in Birmingham City Centre and interacts with various stray animals. He then retraces his steps, walks through some discarded plastic spoons…. Well they look like plastic spoons… 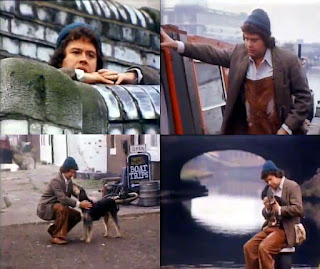 Gas Street Basin was literally down the round from the ATV studios where Crossroads was filmed, and the basin itself was often used as a location in the series.  In the video it is looking a little tatty – and I have to say that it looks a lot better these days.

The record was produced by Johnny Franks. The Music Associate was Ted Taylor and the sound engineer was Steve Taylor. “Waiting at the Crossroads” was written by David Rome and Tony Martell. The disc was manufactured and distributed by Spartan Records.

And that, ladies and gentlemen, is probably everything you ever really wanted to know about this particular record…..Except (of course) a link to watch the video online…