VERY VERY VERY LARGE FIGURINE. DID I MENTION IT WAS LARGE? 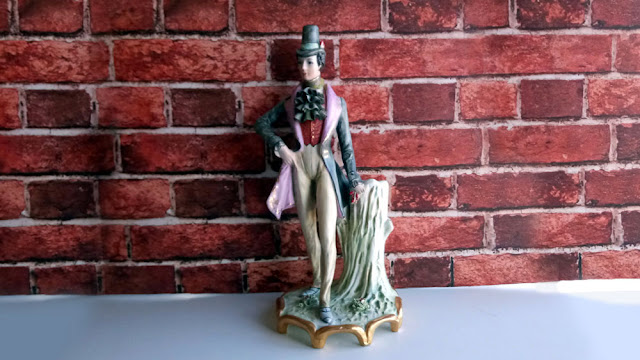 Okay – THIS time I have definitely gone too far. In fact my wife says that it can’t live next to other items in my collection - on top of the piano – in case the kids’ piano teacher sees it…but what could be so awful that it cannot see the light of day?

Quite a large figurine….

To be exact, a 13 inch porcelain figure of a dandy with questionable proportions and a very strange taste in fashion!

The figurine itself was a long-standing part of Meg’s sitting room and its first surviving appearance is in episode 497 from November 1966.

The last appearance was Episode 3005 in September 1978 – There is no reference in the story-line to its disappearance after ten years.

The figure had survived the various different colour schemes...

After a little bit of online searching I believe the designer of this piece was Giovanni Girardi. There are a fair few “Girardi” figures online at the moment with similar writing on them.  According to one online source:

During the years prior to the Second World War, Sculptor and modeller Giovanni Girardi was a former collaborator and Master of Design and Painting at the Torino based 'Lenci' studio.

The factory of the “Girardi Brothers” was opened in 1945.

This figurine has been bugging me for years – I have searched and searched – online and in antique shops, junk shops and in charity shops. Yet again – and quite remarkably – it came up as a suggestion on ebay based on my previous search criteria.

Just goes to show that when it comes to collecting, you should never give up hope!