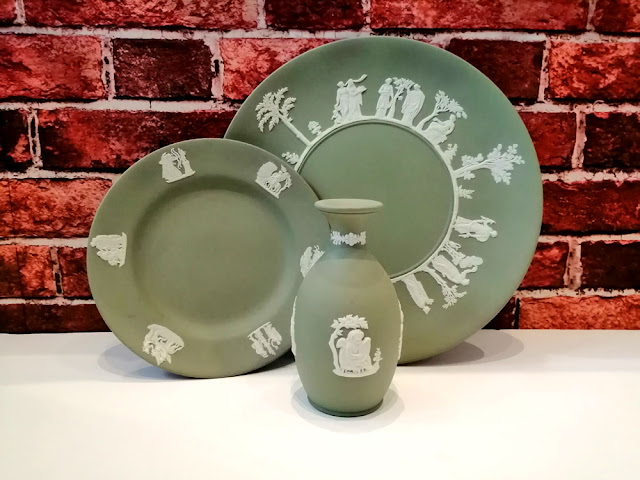 WEDGWOOD JASPERWARE - THE CASE OF THE WANDERING ORNAMENTS

In the 1979 Crossroads Special, one feature mentions that “It’s the little things…that make a difference to the smooth running of the show -

Like making sure that the clocks tell the correct time and that the ornaments and pictures in Meg’s sitting-room are in the same place for each episode.”


Now we’ve already established that I have a ‘thing’ for collecting replicas of Meg’s ornaments. You can find out about the trials and tribulations of finding one piece in particular just HERE, but there are some pieces that everyone seems to remember. Just recently I had someone ask whether I was going to add Meg’s green and white plates to my collection.

Of course I was!

The green plates in question are actually Wedgwood “Jasperware” and they are really easy to get hold of.


According to Wikipedia, HERE, “Jasperware, or jasper ware, is a type of pottery first developed by Josiah Wedgwood in the 1770s. Usually described as stoneware, it has an unglazed matte "biscuit" finish and is produced in a number of different colours, of which the most common and best known is a pale blue that has become known as Wedgwood Blue.”

“Relief decorations in contrasting colours (typically in white but also in other colours) are characteristic of jasperware, giving a cameo effect. The reliefs are produced in moulds and applied to the ware as sprigs.”

“The fired body of each piece is naturally white but usually stained with metallic oxide colors; its most common shade is pale blue, but dark blue, lilac, sage green (described as "sea-green" by Wedgwood), black, and yellow are also used, with sage green due to chromium oxide, blue to cobalt oxide, and lilac to manganese oxide, with yellow probably coming from a salt of antimony, and black from iron oxide.”

The green plates actually feature throughout the time that the sitting-room appeared in its green colour-scheme in the programme. Once the sitting room is redecorated to brown, they are understandably taken off the shelves – never to be seen again.

The plates also appear in the black and white episodes, but since they are lacking any colour it is impossible to say whether they are the same ones. Certainly the colour publicity photographs from the early 1960’s appear to show them as being pale blue, along with the walls, but this might just be an issue with the photos in question...

But back to the 1979 Crossroads Special, and the exact placing of Meg’s ornaments.

I’ll leave you to look at the screen captures below and decide for yourself on how successful this was. Perhaps Meg just liked to move her collection around?

While we’re here…..“Everything on this simple looking set had to be meticulously planned.”
Really?