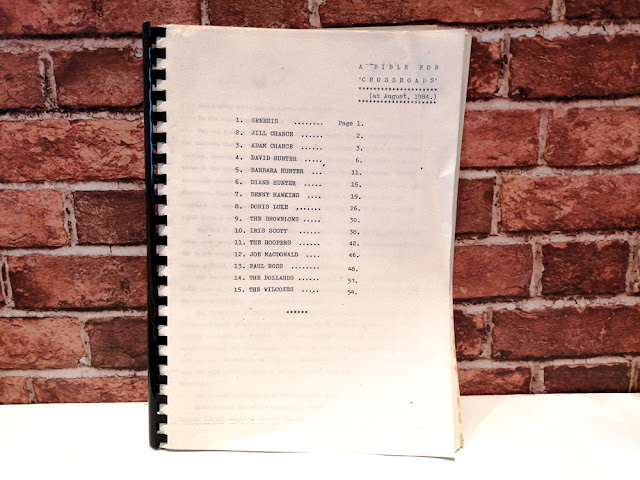 Collecting is a funny old business. Often it involves paying over-the-odds on online auction sites but every so often something fantastic happens – someone gets in touch and offers you items completely free of charge, out of the goodness of their heart…. That, and the desire to de-clutter their houses.

I was contacted a couple of weeks ago by Mike at the Crossroads Appreciation Society. He had been speaking with a member of the production team, who happened to have a few items stashed away in their loft and they were looking for a safe place to keep them.  I duly sent of an email to them and after a few days I was in possession of a fair collection of items that I will be talking about over the coming weeks.

Have you ever wondered just how old Jill was supposed to be at the start of the series? Maybe David Hunter’s political leaning is something that you’ve mused over. Perhaps you’ve wondered how far away Jill’s house, Chimneys was from the motel...?

Well I can tell you exactly …

Jill was supposedly 19 at the beginning of the series. David would probably have voted Liberal, and Chimneys was a 20 minute drive from the motel.

How do I know such trivia? Well one of the items donated to the collection was the “Bible for Crossroads (at August 1984)”

It is basically a document that was written and compiled to inform scriptwriters and the production team about the history of the show, which in 1984 stood at twenty years worth of episodes.  It was also used to cross-reference and check that details about the characters’ past were consistent – After all, there are (apparently) fans out there that memorise every significant detail about the show… and that could easily spot continuity errors…. Perish the thought.

There is a brief one-page outline of the history of the programme, concerning Meg starting up the motel business in the early 1960’s, but otherwise the references to Meg are few and far between.


The outline page tells us that “she has been seen once since her departure, when she made a flying visit to Venice, to wish Adam and Jill well on their honeymoon.” Interestingly, I suppose, the bible doesn’t refer to Meg being a character that could never return – as Producer, Jack Barton had made clear in 1981. Indeed, in 1985 there were plans for Meg to return to the programme on a part-time basis – but alas – there is nothing contained in the document about that.

The major characters all have sections of their own. The Brownlows are grouped together, including Iris Scott until Christmas 1980, when she breaks off into her own section.

There are a few errors that I have noticed – Jill’s first husband is called John Kane, when in fact his surname in the series was “Crane”. There is also question mark over when Jill and Stan married “1970?” – in fact it was 1971. The bible states that  “Iris Scott turned up on Auntie Kath’s doorstep, desperate and broke” – and someone has written in pen that she was “taken by Police on vagrancy” – which certainly gives more detail.

One of the most interesting details concerns the “Diane Hunter” pages and it involves her son, Nicky…

“Nicky is growing up as a sturdy, bright American kid; we have never seen him (since he was two years old) but he’s now thirteen (?) and one day he might come to England… How would Di cope if she suddenly found herself with a teenage son on her hands?

But we must not run ahead  of our story…”

“It is time she met her Mr. Right and settled down at last; she’s not getting any younger – and maybe that’s what will happen… But with Di’s luck, she’ll just be settling down to dish up the spaghetti bolognaise (her speciality – she has limited range as a cook) in her tiny kitchenette on the night he pops the question – when her long-lost American teenage son will walk in out of the blue, and ruin everything…”

Now as I’m sure you’re aware – Nicky never did re-join Diane at the motel – indeed poor Diane died in April 1987.


I love the fact that the bible hints at a storyline that we never got to see come to fruition – but what an interesting story that would have been… Certainly it would be a great way of keeping the character fresh and relevant. I think programmes such as “Neighbours” manage to do this very well, which is why long-established characters like the Kennedy family continue to be involved in major storylines.

So what of the bible?

Does it matter that the history of characters is kept consistent? Yes – I think the ‘payoff’ for long-time viewers when a piece of almost-forgotten history comes back is lovely and is a great ‘reward’.

I can think of a few recent examples  where characters in currently running serials suddenly do a “U-Turn” or change their personalities overnight. There’s nothing wrong with that in principle – plenty of people go through life changing experiences in real life, but in most cases the audience are quick to pick up on anything that affects the “reality” of the shows that they have invested time in.

But here’s the thing…. There’s no way that I would have the nerve to criticise anything in the bible – even if it slightly rewrites history…as the name typed at the end of it means that it is almost gospel.  The final paragraph says this…

“That, then, is how things stand after twenty years of stories woven in and around Kings Oak, and the staff, guests, and friends of the Crossroads Motel.

Peter Ling! Fantastic! Shame we didn’t get to see that Di storyline though...

At this point I probably should briefly mention that the 2001 series didn't strictly stick to the established continuity of the 1964-1988 series.

Perhaps they should have read the bible!