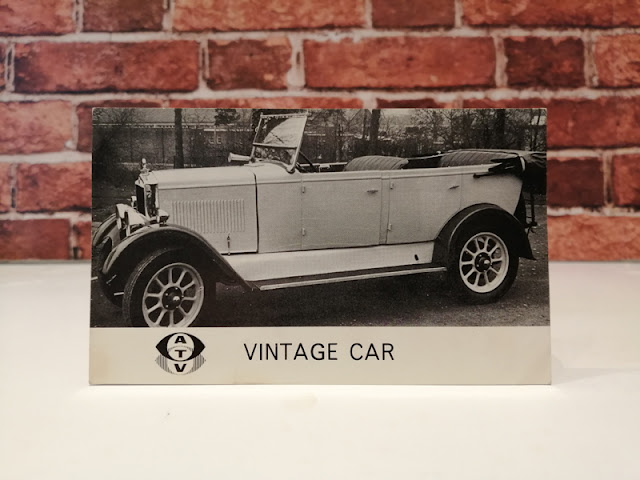 I’ve spoken before about the way that the collection has taken on a life of its own – and I’ve also spoken about how there is now  a model MG Maestro on the shelf. Today I’m looking at another car…or at least a postcard of a vintage car.

“What on earth does that have to do with Crossroads?” I hear you ask. Well actually quite a lot…

The vintage car in question is a Morris Oxford Flatnose, originally built in 1927, but considered nothing but scrap metal by 1964…

In 1973 it was found by ATV in a poor condition at a garage in Brownhills, Staffordshire.

With the co-operation of the Automobile Association, the car was restored by British Leyland Austin Morris apprentices, and its progress was covered by the nightly regional news programme “ATV Today”.

Amazingly, you can actually watch a compilation of these ATV reports on the MACE website and learn about the level of expertise that went into the restoration.

The car was given the name “Harriet” and was introduced into the story-line of Crossroads. It became a much sought after attraction at carnivals and fetes throughout the Midlands.

"Timothy Hunter has written to Meg asking her to look after Harriet when she arrives. But who is Harriet? And why does a woman who  books in as Harriet Blair, a day earlier than expected, deny all knowledge of Timothy?"

"Meg introduces the long-awaited Harriet, and everyone is astonished."

Sadly, the episodes featuring Harriet have been lost or wiped so no footage of the car in the programme exist – although there is a news report from late 1974 where Bev Smith introduces Noele Gordon to the car.


I am pleased to tell you that the car is still going strong, and was recently sold. You can find links to the sales site below, which also includes some amazing photographs of what the car looks like today.

Of course, fans of Crossroads will know that vintage cars were associated with the programme for many years. Another ebay purchase , although not an official piece of merchandise, is a copy of a picture that was seen in the chalet set for many years. It is most noticeable in the episodes where Mr. Booth and his wife, Helen are staying at the motel from 1979.

According to what I have found out on the internet, the print dates from approximately 1959 and is taken from a collection by George A. Oliver called "Early motor cars 1904-1915", published by Hugh Evelyn Ltd, 9 Fitzroy Square London.


Finally, here’s a quick look at the original 1960’s reception area for the Crossroads Motel, featuring a lovely image of a vintage car above the doors.

And one more image from the later years of the show – In 1985 the “Rally Bar” featured – you guessed it – pictures of vintage cars!

I definitely won't be able to afford a vintage car for the collection - but I can just about manage a postcard!